Bishop Brendan Leahy was born in the Rotunda Hospital, Dublin on March 28, 1960. He is the third of four children born to Maurice and Treasa Leahy, both of whom originated in West Kerry and were teachers in Dublin (in the 1940s Bishop Brendan’s father taught for a year in Athea, Co. Limerick where he is still remembered for the football skills he exhibited in the local team that won a championship at that time). Though a “Dub”, Brendan realises there is much of Kerry in him as he spent long periods each year in Ballyferriter. 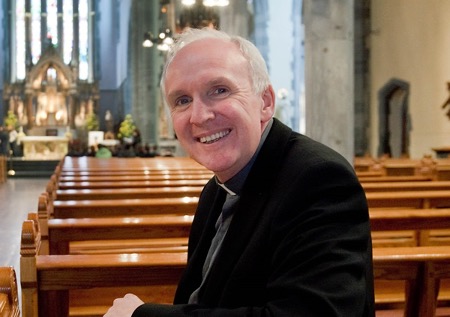 Bishop Brendan’s family lived for several years in Crumlin parish, Dublin, where he was baptised, made his first communion and was confirmed. Though the family moved to Ballyroan, Rathfarnham when Brendan was six years old, he continued to attend St. Damian’s National school in Crumlin where his parents were school principals. In 1970 he took part with a group of other boys from that parish in a week-long summer camp run by the Salesians in Pallaskenry. It was his first time away from home and he enjoyed it greatly.He remembers the Salesians’ kindness, good fun and ability to introduce them to a greater understanding of the Mass. During these early years, Brendan attended the College of Music Chatham Row, Dublin, where he studied music theory and piano.

Brendan attended the local secondary school in Ballyroan, Coláiste Éanna C.B.S. During his school years (1972-1977) he edited a college magazine, took part in school musicals. It was on a school tour that he visited Lourdes in 1973. During these school years his sport was swimming and jogging. Of course, these were also the years of the Dublin-Kerry All-Irelands which were the source of much lively discussion in his family. The parish of Ballyroan was a new, developing parish and Brendan became quite involved in a youth group called RAY(Renewal and Youth), the parish folk-group and summer youth projects.

As he looked to the future after secondary school, he considered the possibility of a career either in teaching, or in journalism or in law. He decided to go to UCD to study law. He enjoyed his Law studies, became a member and then treasurer of the UCD Law Society. He also became involved in Free Legal Aid Centres (FLAC) that saw him go weekly with other Law students to set up clinics in Dublin for the purpose of advising people who couldn’t otherwise afford legal advice.

Brendan took part in some of the activities of the UCD chaplaincy. In particular he helped organise a major college-wide retreat that was hosted by Jean Vanier, son of the Governor General of Canada, philosopher and founder of L’Arche, a movement of communities where people with and without intellectual disabilities share life together in community. Another significant moment at this period of his life was the visit of Pope John Paul II to Ireland. Brendan helped as a steward at the Phoenix Park and was also involved in bringing a group of young people to Galway for the Youth Mass there with the Pope. 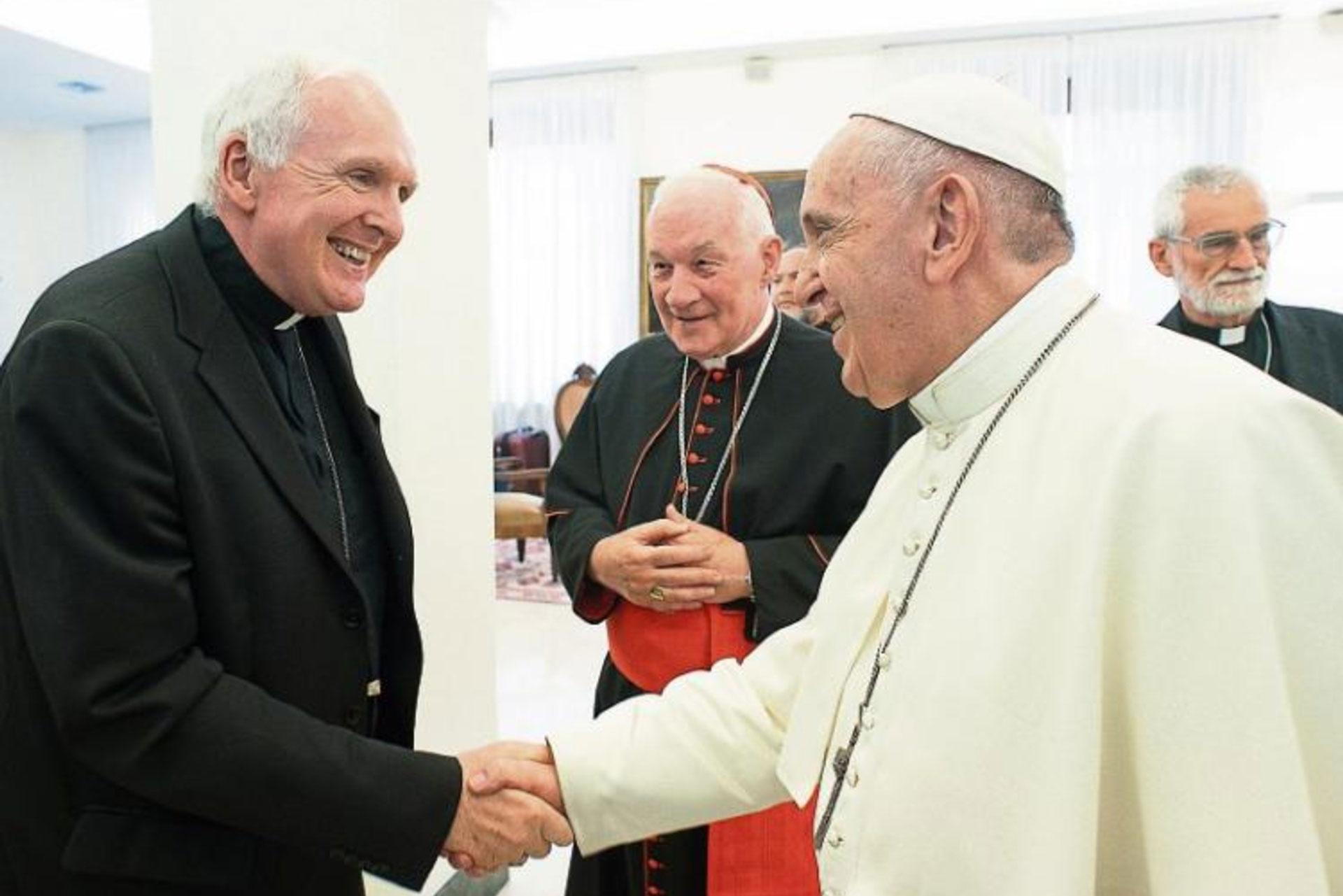 During his years in UCD Brendan increasingly felt called to follow Jesus by becoming a priest. It was something he had sensed since his teenage years and now proceeded to act on it. He entered Clonliffe College, Dublin in 1980. He spent the first year pursuing a course in theology, spirituality and psychology at the Mater Dei Institute of Education. He remembers fondly Sr. Bernard Boran, who was his first teacher of systematic theology, from his time there. After this first year he began his studies in philosophy. He was introduced to the famous classical philosophers such as Plato and Aristotle, Augustine and Thomas Aquinas as well as more contemporary thinkers such as Eric Voegelin and Bernard Lonergan, Albert Camus and Martin Heidegger. At this time, too, he studied for the Bar in King’s Inns and was called to the Bar in 1983. During these first years in the seminary, Brendan deepened his contact with the Focolare Movement that he had come to know. This became a very important influence in his life. It is an International Movement, founded by a young lay woman Chiara Lubich and her companions during the Second World War. Its focus is on putting the Gospel into practice and contributing to building a more united world in accordance with Jesus’ last will and testament: “May they all be one”.

Having completed his philosophical and legal studies, Brendan was sent to Rome to continue his study of theology (1983-1991). He lived firstly at the Irish College and then the Portuguese College. Rome was a wonderful experience of the universal Church. He attended the Jesuit-run Gregorian University, leading to his Doctoral award for his research supervised by the Spanish theologian, Angel Anton, on the theme of the Marian principle in the Church in the writings of Hans Urs von Balthasar, a Swiss theologian. During this time too, Brendan spent long periods in Germany, in particular three months at the Ecumenical Centre, Ottmaring, near Augsburg. Among his lecturers at the Gregorian were the Jesuits Gerald O’Collins, John O’Donnell, Jared Wicks, Philip Rosato, Angel Anton, Francis O’Sullivan, Rene Latourelle, John McDermott, Antonio Orbe, Edward Kilmartin, Thomas Buckley, Ugo Vanni, René Fisichella. During these years in Italy he was also able to deepen his contact with the Focolare community as well as others new movements and communities present in Rome.

In 1991, Brendan was appointed to Clonskeagh parish, Dublin, the Church of the Immaculate Conception. He remembers very fondly and with great gratitude the kindly and wonderfully pastoral parish priest Msgr. Michael Browne who had been one of the major figures in Ireland in establishing what would become ACCORD. During his stay in Clonskeagh, Brendan became chaplain to the German school. 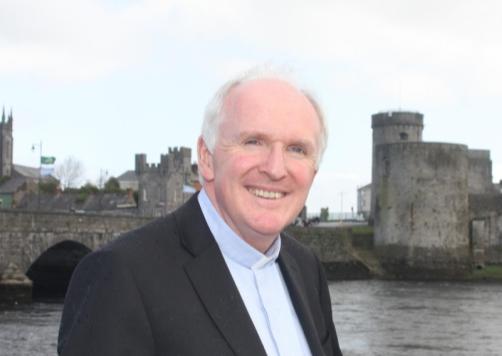 After a brief year there he was appointed to the staff of Clonliffe College and of Mater Dei Institute of Education. This brought him into contact with many candidates for priesthood as well as many young men and women preparing to be teachers of religion at second level. For a brief period in 1995-1996 he also helped out in Sutton parish in Dublin. These were dynamic years for the Mater Dei Institute that was to become in 1999 a college of Dublin City University. When he became Registrar in Mater Dei in 2004 he worked closely with the Director, Fr. Michael Drumm, a classmate of his from Rome and Msgr. Dermot Lane, President of the college. Previously, he had also worked with Sr. Marcellina O’Sullivan, a Presentation sister, whose kindness he recalls with gratitude. As registrar, Brendan led the quality review and quality promotion unit of the college. Part of his duties as Registrar was also membership of the standing committee of the Academic Council of DCU.

When Clonliffe College closed in 1999, Brendan continued on the staff in Mater Dei while also acting as a parish chaplain in Lusk parish. Among his duties in Lusk was to help in the preparation of children who were making their confirmation. In 2004 Brendan went to live in the Focolare Centre, Prosperous, Co. Kildare where he was to remain until 2013. He was appointed professor of Systematic Theology at St. Patrick’s College in 2006.

Since the mid 1990s Fr. Brendan has been very involved in ecumenism at both a diocesan and national level. This was the context where he got to know Bishop Trevor Williams who was involved in the Corrymeela community. Brendan became chairperson of the Dublin Diocesan Advisory Committee on Ecumenism, secretary of the Bishops’ Conference’s Advisory Committee on Ecumenism and a member of the Inter-Church Meeting. He also cofounded, along with Rev. Dennis Cooke, Methodist and then Principal of Edgehill College, Belfast, a programme of studies in theology for Catholics and Protestants entitled “Exploring Theology Together”. For several years in the 1990s Fr. Brendan was confessional lecturer at the Irish School of Ecumenics. He has attended and spoken at various meetings and conferences on ecumenism. He is currently co-chair of the Theology Forum of the Inter-Church Meeting. From 2007-2012 Brendan was a member of a team from the Vatican’sPontifical Council for Promoting Christian Unity in conversation with the Salvation Army. In recent years, Fr. Brendan has engaged in inter-religious dialogue, becoming a member of the Three Faiths Forum of Ireland and, more recently, working towards the establishment of an Inter-Religious Council in Dublin. 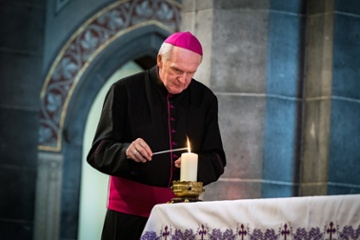 Fr. Brendan is a member of the Pontifical Theology Academy since 2004. He has written many articles and books on themes such as peace and forgiveness, faith questions, ecumenism, new movements and communities, Mary, Church, priesthood, historical treasures of Ireland and spirituality. He is a member of the Focolare Movement’s International Study Centre. Since 2009 he has been a visiting lecturer at the Sophia University Institute, Loppiano, Florence. He enjoys the international dimension of the student body there.

As a member of the Irish Bishops Conference, Bishop Leahy is Chair of the Commission for Catholic Education and Formation, of the Council for Catechetics and of the Advisory Committee on Ecumenism. He is currently Co-Chair of the Irish Inter-Church Committee. He is President of Veritas, the Bishops Publishing Company. In 2018 he became the chair of the section on inter-religious dialogue of the Commission of Evangelization and Culture of the Council of European Bishops’ Conferences.